Parts and functions of the brain

The brain works like a big computer. It processes the information it receives through the 5 senses, and sends back messages, conscious and unconscious, to the body. However, the functions of the brain go much further with the ability to think, make decisions and feel emotions.
The size of the human brain can be estimated at two clenched fists and its weight is around 1.5 kg. On the outside, it looks a bit like a big walnut, with folds and crevices. Brain tissue is made up of about 100 billion neurons and a trillion cells that support and nourish the tissue (glial cells).

The brain is made up of different parts: the brain, the cerebellum and the brain stem. The brain, for the most part, is made up of the cerebral cortex (divided into 2 hemispheres, right and left, which themselves can be divided into lobes) as well as the thalamus, hypothalamus, amygdala, hippocampus… Then, moving closer to the spinal column, we find the other parts : cerebellum (at the back) and the brain stem (composed of the midbrain, the pons, and the medulla), and finally, we reach the spinal cord. 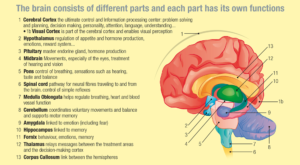 A neuron is a cell composed of a “body” (like all cells, with a nucleus containing DNA and organelles for the synthesis of proteins and energy), small receptor “arms” called dendrites and a long transmitter “arm” called an axon. A neuron will pick up different types of information or stimuli and transport them as an electrical signal (the myelin around the axon allows rapid transport). On arrival, the electrical signal allows the release of neurotransmitters (chemical molecules). These will end up in a small space between 2 neurons, called a synapse, and then bind to the next neuron. If there are enough neurotransmitters that bind to the receptors of the 2nd neuron, the activation threshold will be exceeded and an electrical signal will be created and propagate to the end of this neuron, releasing neurotransmitters in a new synapse, etc. There are also inhibitory neurotransmitters (e.g. GABA), which aim to prevent activation of the 2nd neuron. Finally, specific neurotransmitters allow the transmission of specific information (dopamine – for motivation/reward system, decision of movements, serotonin -stability, inhibition-, acetylcholine -muscle contraction, memory-, noradrenaline -regulation of metabolism, attention, learning- … ).3,4,5

How does vision work ?

How do our eyes and brain work together to transform light into an image? Light rays enter the eye through the cornea, the transparent layer on the outside of the eye, and then pass through the pupil in the centre of the iris. The iris has the ability to enlarge and shrink, depending on the amount of light entering the eye. The light rays then pass through the natural crystalline lens of the eye, which shortens or lengthens to focus the light rays correctly on a specific point on the retina. The retina captures all the light rays thanks to two types of cells: the rods are sensitive to the intensity of the light, and the cones are used to see colours (they are activated by green, red or blue). The cells that are activated send an electrical signal towards the optic nerve. The signals coming from each eye meet at the optic chiasm and then divide again according to the visual field (the left part of the image – coming from both eyes – goes to the right hemisphere of the brain and vice versa). These optical fibres then go to the back of the brain, in the visual cortex part of the occipital lobe, where the information will be decoded.6, 7,8 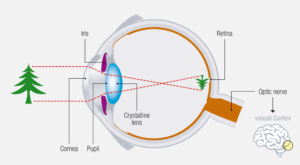 Aging of the brain

As we age, the brain changes at all levels. The morphology is different: the volume decreases (from -5% per decade after 40 years old, especially in the prefrontal cortex which regulates reasoning, and part of the personality and emotions), the vascularisation changes, irrigating certain areas less, etc. Modifications are also found at the level of cells (slower transmission of information -demyelination-), synapses (changes/loss of connections) and molecules (reduced secretion of neurotransmitters and hormones).

Fortunately, the brain remains plastic and some losses can slow down or even improve with time and training. Certain factors such as regular exercise, healthy nutrition and a limited alcohol intake, seem to be beneficial in keeping the brain functional. Thus, according to article “Dietary and Lifestyle Guidelines for the Prevention of Alzheimer’s Disease,”11 published in 2014 in the scientific journal Neurobiology of Aging: “Vegetables, legumes (beans, peas and lentils), fruits and whole grains should replace meats and dairy products as a basic part of the diet”.

This article is intended to summarize the basics of how a part of the human body works, but in no way replaces medical diagnosis and treatment.

Disclaimer of liability:
The information published on www.swiss-alp-health.ch does not claim to be complete and is not a substitute for individual medical advice or treatment. It cannot be used as an independent diagnosis or to select, apply, modify or discontinue treatment of a disease. In case of health problems, it is recommended to consult a doctor. Access to www.swiss-alp-health.ch and its contents is at the user’s own risk.